Although initially I didn't plan on many recurring characters, my real life became interesting enough to validate some main characters based on my friends and I.

These people exist in the real world and are often at my house! Most of them aren't actually furries though. 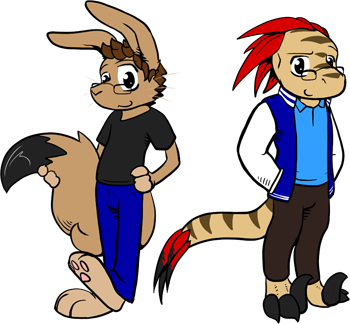 The "main character", and the artist of the comic where he lives. Immelmann, often abbreviated as "Immy" or "Immel", is a graduated Graphic Arts major, self employed through his comics and illustration.

He is rather judgmental, mildly paranoid, and very easily startled. His hobbies include listening to music that his roommate hates and judging people based on their choice in bands and movies. Speaking of which: His taste in movies and books tend to be science fiction, and his taste in music tend to be various types of metal.

In comic #230, in the last of a long line of transformation-based-jokes, the former wolfrabbit permanently changed into a dinosaur and started to assume a more "jock-like" personality. 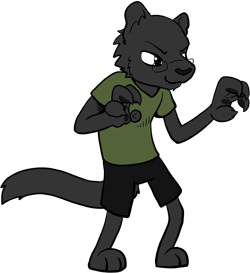 This is Immelmann's roommate and friend since high school, although they didn't start to seriously hang out until Immelmann was in college. He's not actually a furry in real life, but finds the subculture fascinating - and by fascinating, I mean morbidly hilarious. He has substantial martial arts training, both with and without weapons. 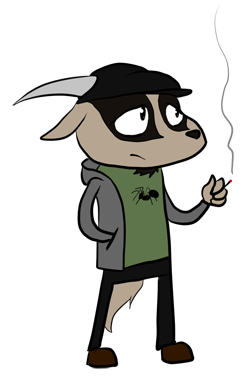 Shugwar describes Malik to Immelmann as, "He's like you, only he has a job!"

In this way, he means that Malik is constantly busy with school, his job, and his myriad of personal art projects. Even when he's hanging out with someone, he feels guilty that he's not getting something done. He is a musician in a loose sense - yes, he has recorded and created maybe hundreds of songs, but his super-human standards of quality ensure that he never released any of them to the public.

His music tastes are wide and eclectic, and it certainly fluctuates, but it seems to gravitate towards hip-hop and certain types of metal. 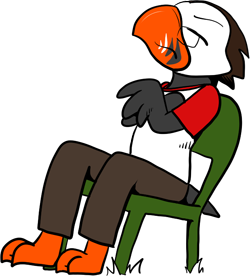 Bill (shown here indignantly sinking into a swamp to prove a point) was a friend of Malik's in college, who he dragged over and forced us to hang out with. I think it took literally 3 minutes for us to insist he come over as often as possible from that point on.

Compared to Immy's egotism, Shugwar's machiavellianism, and Malik's psychopathy, Bill is concidered the most normal and reasonable friend in the group. He's a scholor of disney films and other fine animation and I swear to god Bill if we have to talk about Frozen again I'll- 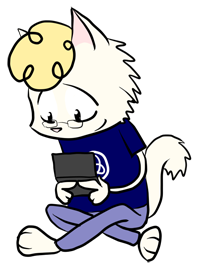 Epam and Shugwar grew up on the same street and were childhood friends. Epam was the first friend Immelmann made when he moved to Massachusettes in early Middle School, and they have remained in contact ever since. He is a big fan of anime and video games - one could possibly describe him as a Japanophile. Is that a word?

His hobbies include tricking people into thinking he's gay, cheating the unemployment office, and combining words in new and exotic ways (or "newzotic" ways). Concession fans may recognize his work, as he is the author of the infamous "Mr. Dude" filler strips. 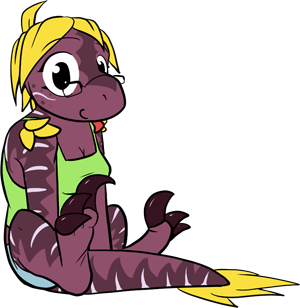 Tsumi is Immelmann's wife-to-be, currently living in England (though she visited the colonies for some Ballerina Mafia strips). She's an english major who aspires to get into editing and writing, and indeed does editing and proofreading for some of Immy's work.

Like Immy, she can be pretty sarcastic, and despite the two of them getting into a more athletic, sports-watching lifestyle, she can be a pretty huge nerd when she wants to be.

Many of the characters that show up here originalyl appeared in Concession. 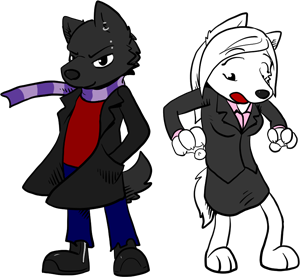 Joel was essentially the main character of Immelmann's first webcomic, Concession. A sadistic and amoral pervert, he spent the comic basically harassing people and driving them crazy for some convoluted revenge plot that didn't necessarily make any sense. Here, though, he's more just a comedic asshole. He mainly appeared in a story spanning between comics #201 and #224 involving time travel.

At the end - spoiling warning? do people care about spoilers for god damn Ballerina Mafia? - he was punished for fucking up time by being turned permanently into his female alter ego, Julia Chase. 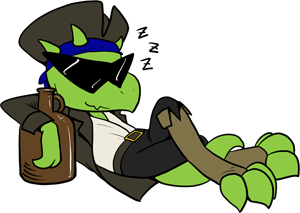 A pint-sized pirate who harassed an unnamed family of NPCs before jumping ship to Joel's time travel plot. He drinks, he scurries, he causes mischeif, and you can put him in a breadbox! 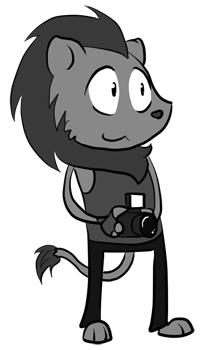 Sphix was Immelmann's boyfriend who lives in Utah. The two met online - Sphix was a fan of Immelmann's comics, the two became friends, and eventually fell in love. Sphix is studying criminal justice and aspires to one day work as an FBI agent. He'll probably work as a cop before that happens.

He's one of the two main characters (the other obviously being Immelmann) who are actually into the furry fandom. He's been with Immelmann to a number of furry conventions, which is the setting where they met face-to-face for the first time (although Immy was dating someone else at the time). At some point after that, Sphix drove all the way from Utah to Massachusetts to spend a week in Immelmann's dorm.

He's interested in parkour and hard-core bondage (he's a sub). He is a photographer in his spare time and enjoys electronica. 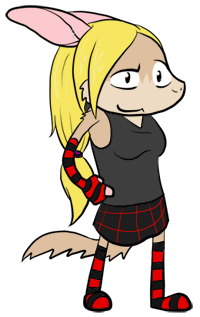 Zoë appeared in late Concession as part of "the other cast" of characters working at the movie theater. He became friends with Matt and Joel, getting Matt into crossdressing

Crossdressing, right, see Zoë's a guy who's constantly crossdressing, and is pretty good at it too. Underneath, he's totally male, and is not a transsexual at all.

Zoë, Clive, and Ossian were friends in high school.

Clarissa was part of a secondary cast that appeared in the later days of Concession. She was introduced as, "one of those furries who wants to be a human," which is extrapolated into a form of Species Identity Disorder, an in-universe psychological condition where furries feel they were born into the wrong species. Wanting to become a human is common with these people, though some wish to be another furry species - some wish to be insects, as seen by some of the "Buggy fandom", as seen in comics about "Arthrocon". Every day, Clarissa applies a Nair-like substance to her entire body (except her ears and tail) to remove her fur, and she is saving up for surgery to, one day, become human.

Despite her condition, and a history of very serious depression and self-destructive behavior, she's actually relatively sane and intelligent compared to the rest of the cast, and thus never got a great deal of screen time in Concession. 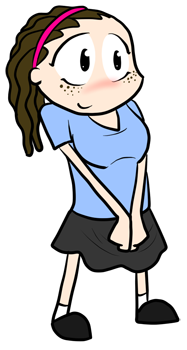 Ossia is the one of the rare humans to have ever worked at the Concession stand. She was born of Scottish parents and spent most of her childhood overseas, although her high school years were spent here in America, during which she became friends with Zoë and Clive. After high school, she and her entire family spent almost a year in Scotland to tend to their dying Grandmother.

Ossia was previously known as Ossian and was born a boy. She was made into a girl as an April Fool's Day prank.

The name "Ossian", and it's female variant, "Ossia", are based on Gaelic words meaning "deer". 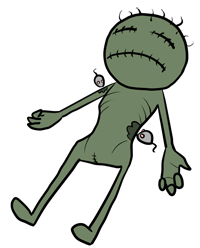 Despite being a corpse kept in a state of suspended decay, Corpsie has somehow managed a very active celebrity life as a television actor, known for his rampant drug problems and crazy parties.

Little is known about his life or real identity. A tattoo on his left arm is written in an unidentified script. His body has been resistant to dating methods, but the thread used to stitch closed his eyes and mouth are assumed to be hundreds of years old. He is presumed to have died of starvation or dehydration, as evidence suggest his eyes and lips were sewn shut while he was alive. Injuries believed to have existed before his death include a large fracture to his skull and a missing fingertip on his left hand. Further missing digits are theorized to have been bitten off postmortem. 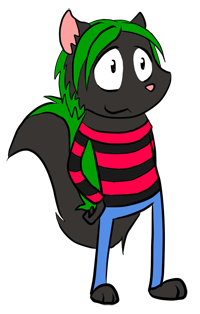 Nicole started as a randomly-generated character in the beginning of Concession, intended to appear only once. Fans really liked him, and he got a second appearance... and then a third... and by the end of the comic was a major character, easily a top pick for fan favorite.

Nicole is a faggy skunk boy, often confused for a girl, although he does not specifically cross-dress - he just has a girlish sense of style. In Ballerina Mafia, he appears as a waiter in the cast's favorite restaurant, where he works weekends. He works weekdays in his father's business and moonlights as a super villain.